Darknet in quarantine: how the audience and income of illegal sites have changed

Darknet in quarantine: how the audience and income of illegal sites have changed

Due to the crisis caused by the pandemic, the NPO that is developing the Tor browser, broke up with nine out of 22 full-time employees. We tell you how the coronavirus affected Tor users and the sites they visit.

How the audience in Europe and the USA has changed
The global lockdown has increased the audience of Tor, browser and proxy system, which allows you to establish anonymous connections. The largest growth is observed in countries that have been hit hardest by the coronavirus.

For example, in Italy and Spain, the audience has increased one and a half times. In January, there were 20-25 thousand users a day, follows from the data of Tor Metrics, in April - about 40 thousand. 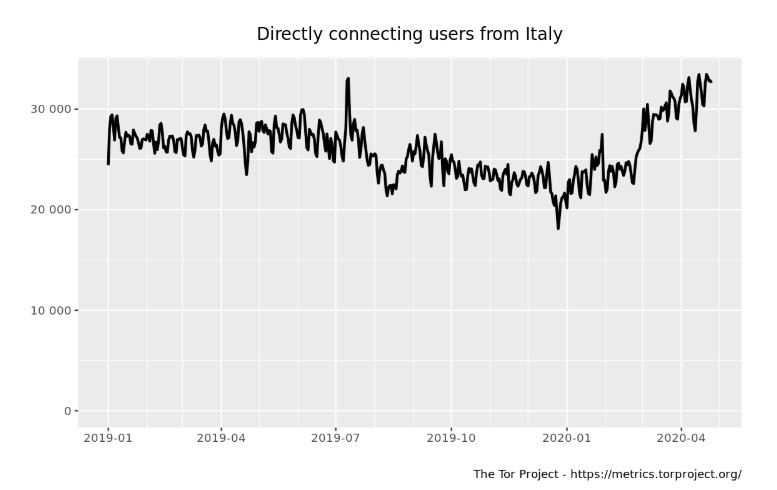 Previously, a similar leap in Italy occurred in June and July 2019. Before that, the country was adopted law according to which killing a person in the territory of his own house with firearms can be equated with self-defense. But the process of acquiring weapons was not simplified. The Italians could go to the darknet for this. 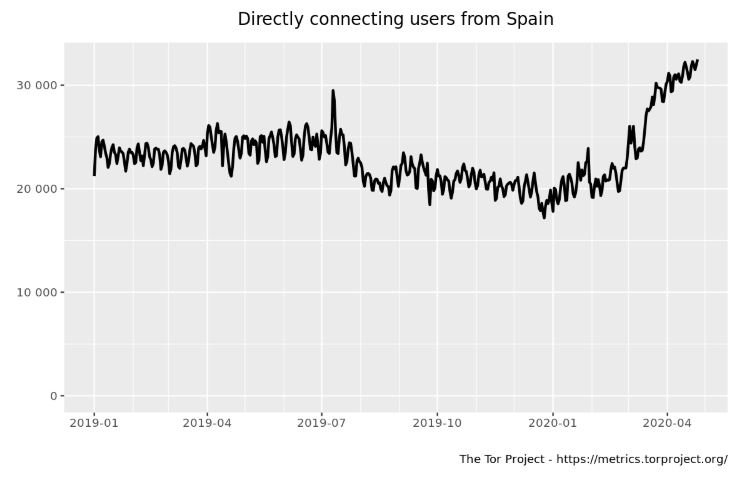 In Spain, the chief commissioner of the police, Jose Garcia Molina, drew attention to the growth of the audience on the darknet. At a press conference on April 3, he reported that at least 33 thousand people log into the country every day, which is almost twice as much as usual. The policeman feared that there would be more cybercrimes.

“In recent days, 130 domains associated with the coronavirus have been acquired,” said Garcia Molina. - Some were bought in bulk. This means that they can be used for illegal purposes. For example, scammers selling “vaccines” against coronavirus have stepped up. ” 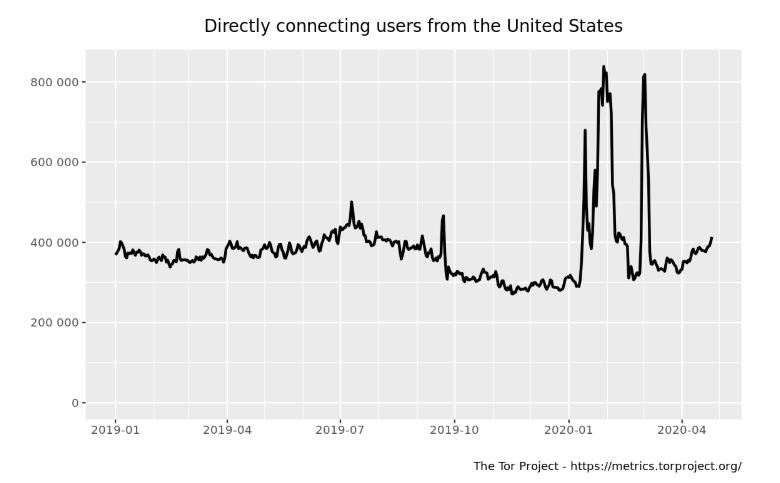 In China, too, growth, but the absolute numbers are small - in this country Tor is effectively blocked. The average for 2019 is 2 thousand users per day. During the summer protests in Hong Kong, the daily audience grew to 6 thousand users. In April 2020, 5,000 Chinese users per day entered Tor. 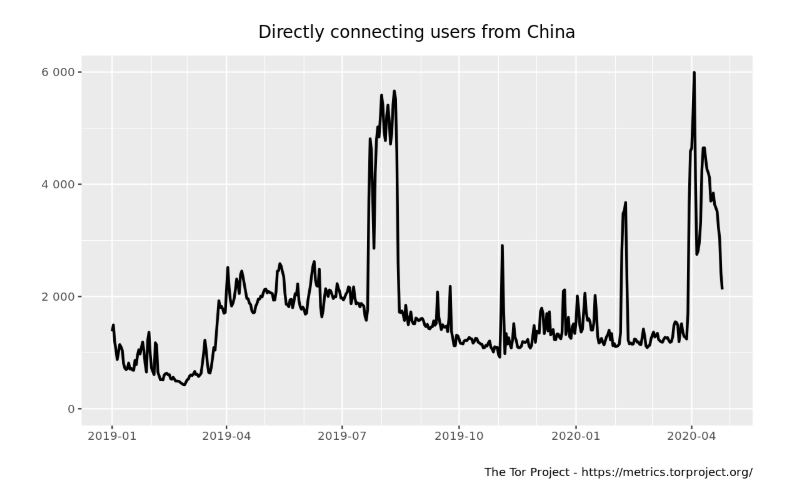 How the audience and demand in Russia have changed
In Russia, the peak of popularity of Tor - 600 thousand people per month - fell on July 2019. Russian service BBC suggested three explanations: hacker bots, an attempt by the authorities to destabilize the darknet, and a massive advertising campaign for drug dealers. Subsequently, the audience declined. By the start of the Tor pandemic, 380,000 Russian users were visiting per day. In March, the fall stopped. Now - about 400 thousand people a day. 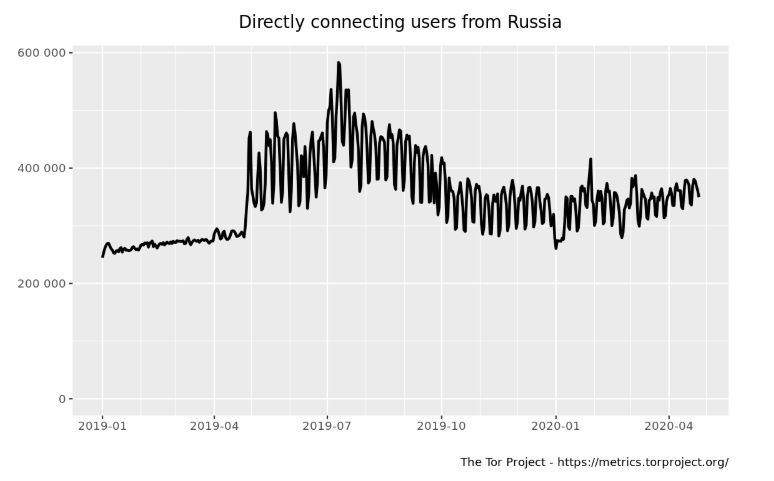 The same thing (adjusted for scale) is happening in Ukraine. The peak was at the beginning of 2019: more than 80 thousand users per day. Gradually, the daily audience decreased to 50-60 thousand users. In February, the decline stopped, and from time to time there are races. 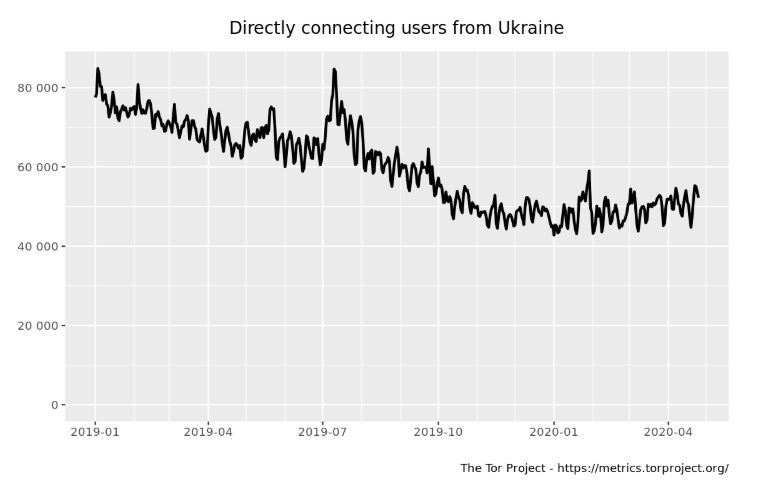 As the spread of coronavirus infection on Russian-language sites on the darknet, thematic ads began to appear that were previously hard to imagine.

Some sites struggle with similar ads. For example, darkoparket Monopoly threatened eternal ban for the sale of "vaccines against coronavirus."

What's next
At the end of 2019, according to the Chainalysis cryptocurrency market software developer, users from all over the world spent about $ 5 million per week on sites available through Tor. The decline in the value of cryptocurrencies has not changed. Chainalysis believes that consumers of illegal goods like stolen information or drugs buy them anyway - regardless of the bitcoin exchange rate.

But with the spread of coronavirus infection, turnovers in the darknet began to fall. By mid-March - up to $ 3.8 million per week. Bitcoin then cost $ 6.7 thousand per coin.

Merchants on the darknet slowed sales because "they fear that the bitcoin they accept today will be useless tomorrow," Chainalysis believes. “In addition, the Mexican drug cartel’s difficulty in producing fentanyl (a synthetic drug. - Note by The Bell) has recently been reported,” the report said with reference to material Vice on the halt of supplies from the Chinese province of Hubei due to an outbreak of coronavirus. This region is considered the center of world trade in fentanyl.

After the end of quarantine in China, turnover began to grow, but it was far from the previous levels. In total, in 2019, according to Chainalysis, the turnover of trading floors on the darknet amounted to $ 790 million. This is an average of $ 16 million per week. Year-on-year growth is 70%.

What part of the sales on the darknet is Russia is unknown. But Russian is the most popular language. It is used on 41% of the pages, counted in 2015, Trend Micro.

In Russia, coronavirus has reduced the drug market due to the complexity of the work of the "kladmenov" wrote "Mediazone". Back at the end of March, the Hydra drug trafficking darknet site notified sellers that they must remove “treasures” that cannot be taken from the windows. The topics “How to pick up a treasure in self-isolation mode” appeared on darknet forums.

Due to quarantine, 55.7% of users have become more difficult to pick up "bookmarks", showed interview more than 400 people in the Telegram channel of the Foundation for the Protection of Health and Social Justice. Andrei Rylkov. 38% complained of a shortage of psychoactive substances.

Источник
You must log in or register to reply here.
Similar threads